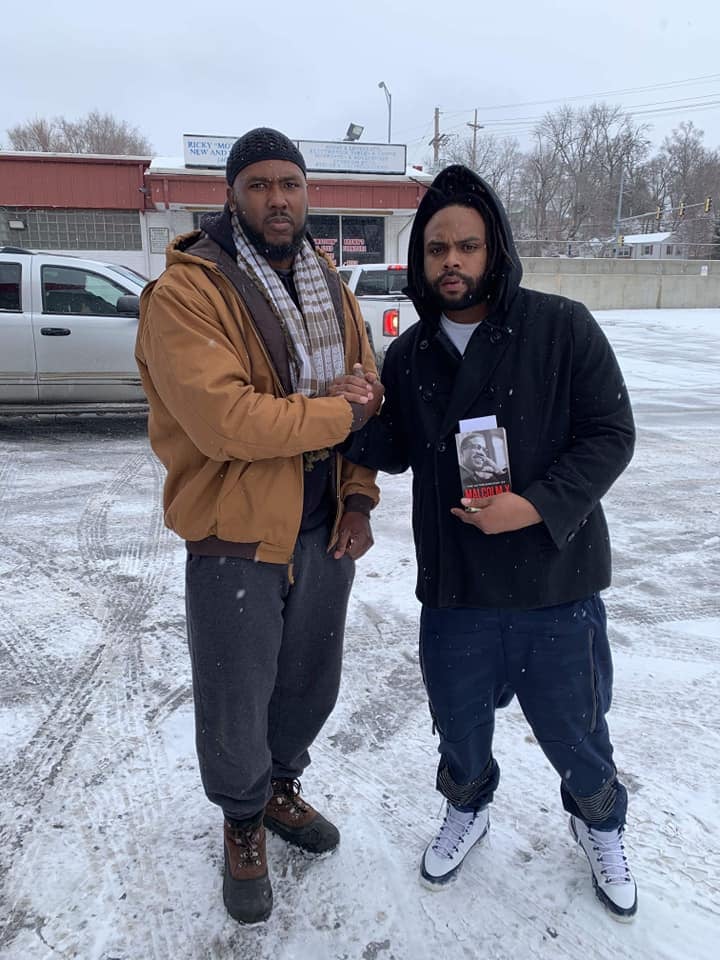 “And who is better in speech than one who invites to Allah and does righteousness and says, ‘Indeed, I am of the Muslims.’ 41:33

Omaha, Nebraska, was the birthplace of Malcolm X in 1925. His father, Earl Little, and his wife, Louise, were members of Marcus Garvey’s Univeral Negro Improvement Association.  But sadly, Omaha shall only be remembered as Malcolm’s birthplace because his family fled their home in North Omaha, due to the threats from the Klu Klux Klan. The family settled briefly in Milwaukee, Wisconsin, before finally settling in Lansing, Michigan.

On December, 15th, The Muslims of the Black Dawah Network went to Omaha, Nebraska, to deliver the message of Islam and promote the moral values of Islam.  Malcolm X  taught that the Mosque in African-American communities should never be empty when the surrounding streets are filled with brainwashed Black men in the streets fighting one another and using drugs. The Black Dawah Network is following in the tradition of Malcolm X, who went up and down Detroit’s ghettoes inviting all of the Black community to the Mosque.

The Muslims from Black Dawah Network went from  Spencer Projects to the South Omaha Projects, 40th ave, and Curtis Block to deliver the message of Islam, explain how  Islam can help our people overcome the pitfalls the system of white supremacy sets up for Black men in the streets and provided free copies of The Autobiography of Malcolm X to those who expressed interest in learning more about Islam.  The Islamic Outreach event in Omaha, Nebraska was led by Black Dawah Network’s Coordinator brother Qasim Shabazz. Though there was a snowstorm, Black Dawah Network coordinator, Qasim Shabazz continued with the mission and said even if there were a tornado, he would remain steadfast in delivering the message of Islam.

Brother Qasim Shabaz is also the co-founder of the Black Agenda Alliance and he started the first all-Black Football League in Omaha, Nebraska.  Speaking of his passion for dawah, Qasim Shabazz stated“I remember very specifically the condition I was in out here shooting at people, getting shot at, selling dope… it was the Muslims who came to me and began to change me and began to change my thinking. They didn’t come with money; they didn’t come with anything other than enlightenment and some wisdom.”

Chronicling  the History of Racism Against African-Americans in Omaha, Nebraska

The first African-American in the Omaha area was York, a slave of William Clark of the infamous Lewis and Clark expedition.  Fast forward. During the Omaha race riot of 1919, a mob from South Omaha lynched

an African-American named Willy Brown, as he was accused of raping a white woman. Mob violence and racial segregation kept African-Americans subjugated.  According to Nebraska Life, the city’s restaurants had signs that said, ‘We Don’t Serve Any Colored Race’ during the 1950s. The article titled ‘Distilled in Black and White,’ notes that in 1969 riots erupted when Vivian Strong, an Omaha police officer fatally wounded a Black teenager. Today the forms of institutional racism facing the African-American have only shifted from de’jure to defacto.

Racism From De’jure to Defacto

African-American Legal Scholar, Derrick Bell, a pioneer of critical race theory once stated:  “What we now call “the inner city” is, in fact, the American equivalent of the South African homelands. Poverty is less the source than the status of men and women who, despised because of their race, seek refuge in self-rejection. Drug-related crime, teenaged parenthood, and disrupted and disrupting family life are all manifestations of despair the feeds on itself.”

Highlighting the struggles facing the inner-city in Omaha is Rap artist J-Cole. His film ‘Out of Omaha’ provides a first-hand narration of the trials and sufferings of the Black people in Omaha, Nebraska. The movie “Out of Omaha”  centers around the lives of twin brothers, as they attempt a change in their lives. In the film, a powerful scene grips attention when Darrell, an inactive member of the Crips, flashes a blue bandana that represents his gang and says:

“I don’t know, man. That’s what I’m trying to get into school so I can get us up out of this shit here.” Later he says, “My life ain’t perfect right now, I’m still living in poverty, every day gets hard for me. I haven’t made it out all the way either. There’s a time when the streets call me.”

While many may not consider Omaha to be a place where gang violence exists, it is a reality.  The Omaha Magazine notes that: “Omaha wasn’t a place people would have thought the gangs of Los Angeles, California, would make a strong showing. Quite the contrary,  gang members from the West Coast would eventually discover Omaha’s smaller urban landscape to be an untouched and lucrative territory.”

Ex-gang member Edwin Benson remembers the switch taking hold in his teenage years. “The Crips came first, I’d say around the mid-to-late 1980s. They took over areas like 40th Avenue and Hill Top. Benson says. The Bloods territory was further east, big in the Logan Fontenelle projects and up and down 16th street. So, gang-banging kind of took over the city for a long while.”

The Omaha Housing Authority, the government entity responsible for the maintenance of the city’s public housing efforts, established the housing projects in North Omaha as segregated housing for African-Americans. According to A History of Public Housing in North Omaha, Adam Fletcher Sasse notes the plans: “were built here to ensure the effectiveness of redlining and to act as buffers to keep the African-American population from expanding beyond this area.”

Black Dawah Network in service to the Black Community 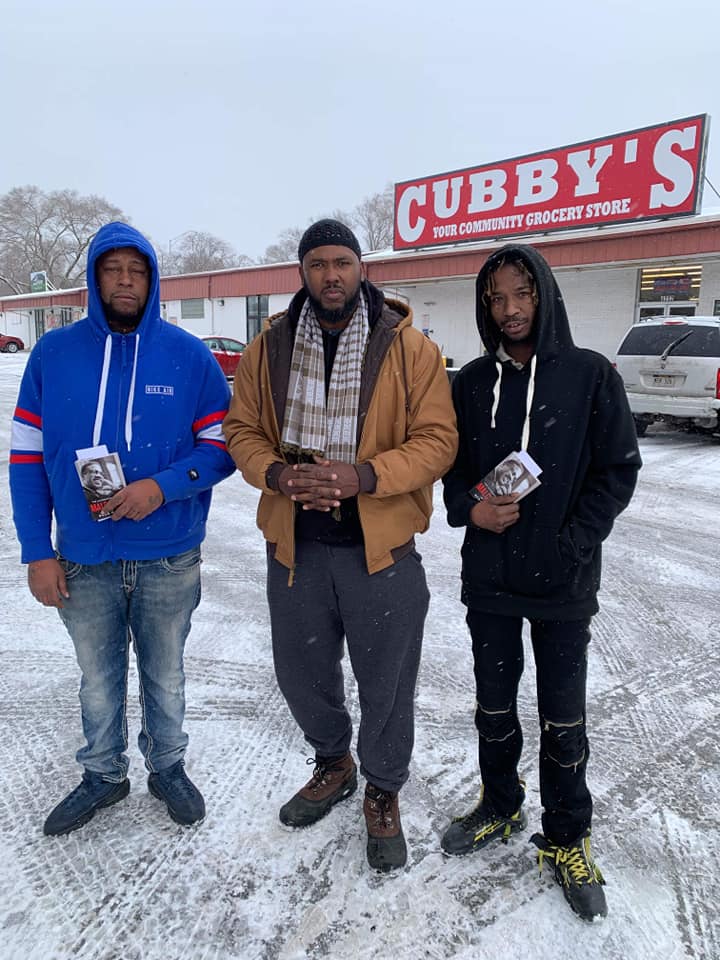 Malcolm X once said, “Much to my dismay,  until now the Muslim world has seemed to ignore the problem of the Black American and most Muslims who come here from the Muslim world have concentrated more efforts to convert white Americans than Black Americans.” The Black Dawah Network was founded in 2019 by Brother Hakeem Muhammad,25,  to bring Islam back to inner-city Black communities by Black Muslims. Our goal is to promote Islamic values in inner-city Black Communities.

Brother Hakeem Muhammad  is a Public Interest Law Scholar. Prior to law school, he taught at debate institutes at U.C. Berkeley and Harvard University. He was a recipient of the National Association of Criminal Defense Lawyers fellowship that pairs law students to study under top criminal defense practitioners in the country, which he used to defend indigent populations in Malcolm X’s former Roxbury neighborhood against criminal charges  Muhammad has also assisted litigation against police forces for acts of brutality against African-American men and studied police brutality litigation with some of the top practitioners in the field.  Speaking on the importance of Dawah in the African-American community, Muhammad stated:

“Malcolm X said he was dismayed by the neglect shown towards the problems facing Black Americans by many Muslims who come here. In the contemporary era, there are many mentally colonized Muslim institutions that have actually transitioned from neglect to wholesale disrespect of urban Black America. Whether it be leading professors at Zaytuna College serving as apologist for police forces that commit acts of brutality against African-Americans, or organizations such as Council on American-Islamic Relations issuing a laudatory eulogy of an oppressor of Black people such as John McCain—prominent institutions of Muslims in America have misappropriated Malcolm X’s legacy and sent the wrong message as to what Islam is.   Now more than ever, we as African-American Muslims of inner-city backgrounds must be proactive in informing our people what Islam is, what Islam stands for, what Islam can do, and call our people back to the politics of Malcolm X. We must create a space where Black Muslims from the inner-city have a voice, and that space is the Black Dawah Network.”

Towards the Malcolm X Annual Day of Dawah 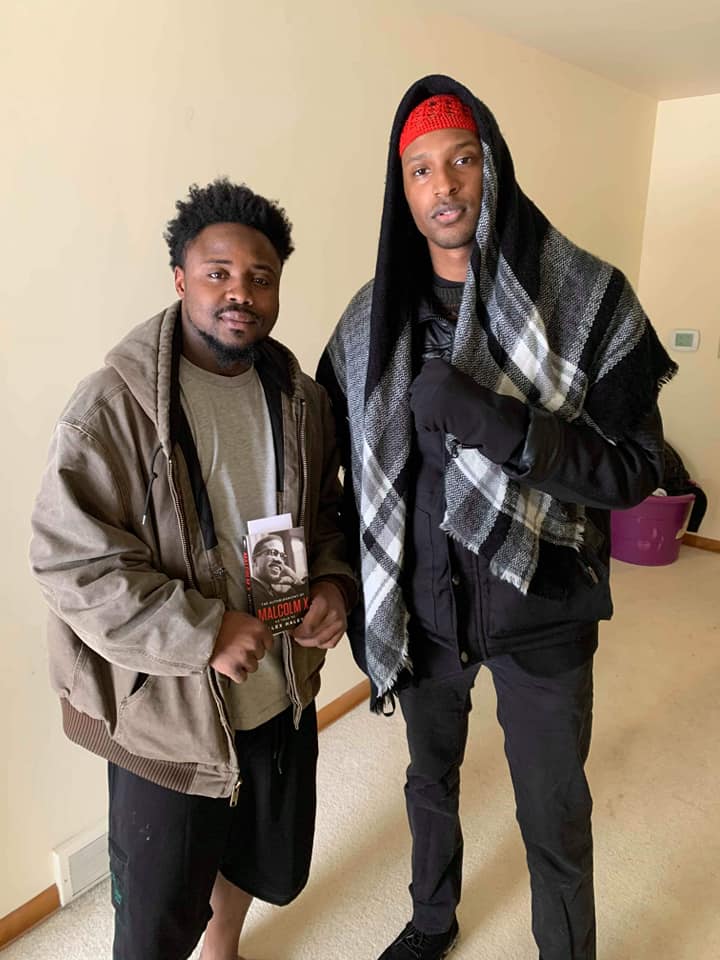 On February 22, 2020, InshaAllah, Black Muslims of the Black Dawah Network will be in the hoods of Chicago, Omaha, Houston, Memphis, Norfolk, Atlanta, and Boston to call our Black people in the streets to Islam and to provide those who express an interest in joining our  African-American Islamic study groups with a free copy of The Autobiography of Malcolm X and the Qu’ran.

Our African-American Islamic Study groups will systemically cover how Islam can improve the conditions of the Black community with topics such as: What does Islamic finance have to say about the practices of white-owned banks whose racially discriminatory practices initiated the subprime mortgage crisis against African-Americans which exacerbated black-white wealth gap? How can returning to the principles of the Islamic intellectual history of Black Muslims in Timbuktu, Mali help close the black-white achievement gap in school?  What are the fallacies of Anti-Islamic Manifestations of Afrocentrism and Black Orientalism? What must Black America know about the role of Islam in slave revolts?

Support the Malcolm X Annual Day of Dawah and be part of a mission to reignite the dawah to Islam in Black America.