Chicago, Illinois, 10/3/2019 The Black Dawah Network was established to convey the intellectual proofs of Islam to Black Americans and invite our people towards the peace and justice of Islam. As such, The Black Dawah Network seeks to project the truth of Islam in comparison with other ideologies and worldviews that vie for influence in Black communities. This is true whether it be the liberalism of the White Man,  Anti-Islamic manifestation of Afrocentrism in the “Black Conscious Community”  or Marxist  & Socialist thought. The Black Dawah Network seeks to remind  Black Muslims of the Islamic solutions to the problems facing Black Americans and empower Black Muslims to give dawah with the highest levels of intellectual rigor.

With this as the objective, The Black Dawah Network has released the booklet “An Invitation to Islam For Black Marxists” by Professor Shareef Muhammad. Marxist and socialist thought has held a large influence in Black liberation movements from the Black Panther Party For Self Defense to the contemporary Black Lives Matter Movement.  It has influenced the intelligentsia of Black Americans from W.EB Dubois to revolutionaries such as Huey Newton.

“An Invitation to Islam For Black Marxists” by Professor Shareef Muhammad represents a major contribution to the African-American Muslim literary canon. The book argues that the “Black” in Black Marxism refers to efforts to reconcile the limitations of Marxist theory to the condition of black people. Many of the concerns expressed by black radicals about traditional Marxism are rectified in Islam.

The book provides a major critique of Marxist concepts from dialectical materialism and outlines why a spiritual basis is needed to foster a just economic order.

The booklet thus represents a major dawah tool that will empower Black Muslims to give dawah in many left-wing and Black radical spaces. Abdul Hameed Salam, the director of the Muslim Empower Institute, wrote that “Professor Shareef Muhammad brilliantly explains why Marxism or the ‘Black Version’ of it is problematic as a solution to the problem of Black suffering. He accurately details how Marxism is simply an extension of white supremacy, and he further delves into the irony of its Black proponents seeking inspiration through the life-giving teachings of Al-Islam, yet preferring a secular humanistic value system originating with the forces that Black Marxists are advocating against. “

Imam Yusuf Rios added, “Professor Shareef Muhammad critically examines and highlights major deficits in Marxism as it relates to Black liberation and existence while making a case  for the transformative power of Islam upon Black communities.”

The booklet provides a background to Black Marxism, its themes and ideas are discussed while drawing a critical comparison with Islam in parallel. Professor Shareef Muhammad opines in the book that,  “The study of Islam in the framework of these ideas helps create an idea about Islam as the real solution and the religion of the future for Black America.”  The rationale behind this effort is to posit the contradictions in the Marxist literature, original and the one modified one that aims to woo the Black community. Professor Shareef Muhammad makes a convincing case that Islam will continue to have a pivotal place in the Black liberation struggle.   Professor Shareef Muhammad writes “The time has come to pick Islam as the most rational and prudent choice and restart the unfinished mission of Malcolm X.”

An Invitation to Islam For Black Marxists been authored by Shareef Muhammad, The Director of the ‘Black Dawah Network,’ who has taught Introduction to Qu’ran at the history Black college of Spelman and African-American studies at Atlanta Metropolitan College.

A percentage of proceeds from the book will go towards future plans of Black Dawah Network to establish the Malcolm X Center of Islamic Outreach in the Black community that will aim to project the truth of Islam to Black America large.

The E-book is available on Amazon.com for $15.

Physical copies of the book will be available on October 6th for $25. 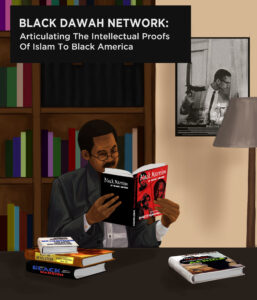