(Editorial Note: In light events unfolding in Minnesota, Black Dawah Network is resharing this piece from brother Zayd. Zayd is an African-American Muslim who converted to Islam and is from Minneapolis, Minnesota. He speaks about the conditions of Black men in the hood of Minnesota and how he came to Islam.) 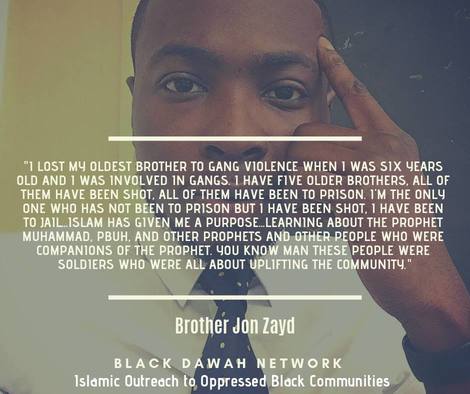 Minneapolis, Minnesota is known for many things.  It has lots of snow. You may think of it if you are kind of connected to Chicago or another city like Detroit or something like that. You may think that it has only white people here. But like other major cities we, too, have our share in the Black community of violence, degradation, unemployment, and achievement gaps.

On The USA Today’s List of The 15 Worst Cities for Blacks to Live In released in November,   Minneapolis ranked number four. Last year we were number two. It’s hard being Black in this city.  We are small and really unheard of, a few days ago we got to our 31st murder. That is major. The crime happens in a small concentrated area of the city. We have a lot of cliques and a lot of gangs. Brothers and sisters that you know are venting their frustrations from lack of opportunity. So, just honestly, not really the best place for people like us.

Growing up, I actually lost my oldest brother to gang violence when I was six years old and I was involved in gangs. I have five older brothers, all of them have been shot, all of them have been to prison. I’m the only one who has not been to prison but I have been shot, I have been to jail. Since I’ve made the transition from jail, have come back in the community, I’m trying to do some work around helping gang intervention.  I’m here on the ground with these young brothers.

I found myself in maybe 2013 in jail with The Autobiography of Malcolm X.  And I picked the book up and I was reading the book and I was like, man, you know it’s amazing that this had come to me because I’m reading that his brother was in the same situation I was currently in. And if I was fortunate enough to get out of this situation, I would go see what this Islam was about.

Islam has given me a purpose. You know I feel like Islam has given me a purpose is giving me some type of guidance some type of map, for how I should navigate life and for how I should be out in the community you know approach young brothers and being out here next to brothers and sisters. It just gives you a mission and it’s like a call to a mission that you have to do something now.

Learning about the Prophet Muhammad, may peace and blessing be upon him, and other prophets and other people who were companions of The Prophet. You know man these people were soldiers who were all about uplifting the community.

We do need to know the practice that  Prophet Muhammad, pbuh had. We do need to let these brothers in gangs know that what you all are doing when we are in the street we’re fighting the wrong type of battles and the wrong type of war. We need to uplift our people and to bring them out of bondage and to bring them out of the social and economic ills that we find ourselves stumbling upon.