Daniel Haqiqatjou is the founder of Alasna Institute and the Muslim Skeptic which is in online course and podcast that implores Muslims to fortify Islamic values amidst the onslaught of secularization. According to his biography on Muslim Skeptics, he has lectured at traditional madrasas and Muslim institutes including AlMaghrib Institute. He was featured as a regular columnist for Muslimatters.com and served as the first Director of Research for Scientism for the Yaqeen Institute for Islamic Research in 2016. 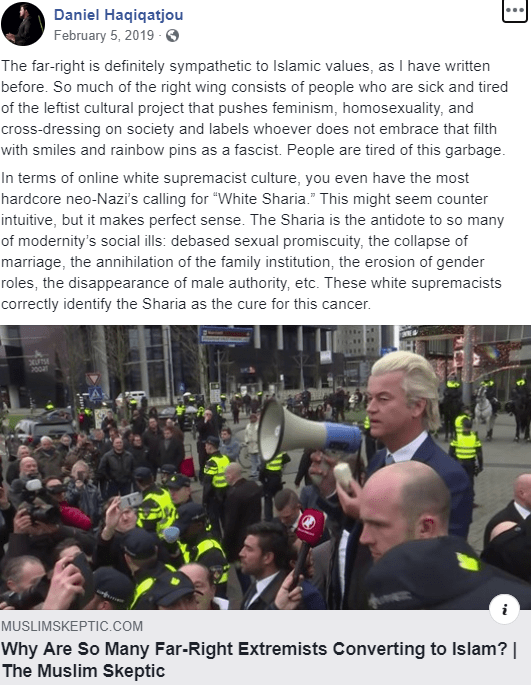 In post entitled ‘Why Are So Many Far-Right Extremists Converting to Islam?,’ he comments on Europe’s white-nationalists co-opting the term Sharia to describe their political goals. Daniel wrote on his Facebook:

The far-right is definitely sympathetic to Islamic values, as I have written before. So much of the right-wing consists of people who are sick and tired of leftist cultural project that pushes feminism, homosexuality, and cross-dressing on society and labels whomever does not embrace that filth with smiles and rainbow pins as a fascist. People are tired of this garbage.In terms of online white supremacist culture, you even have the most hardcore neo-Nazi’s calling for “White Sharia.” This might seem counter intuitive, but it makes perfect sense. The Sharia is the antidote to so many of modernity’s social ills: debased sexual promiscuity, the collapse of marriage, the annihilation of the family institution, the erosion of gender roles, the disappearance of male authority, etc. These white supremacists correctly identify Sharia as the cure of this cancer.”

This is not the idea behind their using the term at all. It is funny how despite such a strident stance against postmodernism he fails to recognize or allows for this textbook example of the postmodern usage of the term Sharia. Daniel Haqiqatitjou’s public excoriations are ripe with hypocrisies. He often rails against the evils of post-modern interpretations by Leftist Muslims but makes a concession with white nationalists’ appropriation of terms like Shariah.  This exemplifies postmodernism’s rejection of formal definition and tradition.

Only the thickheaded would miss the irony of an openly anti-Islamic and anti-Muslim immigrant faction whose political platform is almost exclusively to prevent Sharia from taking over Europe using the term. Daniel seems flattered that white supremacist’s are appropriating Islamic terminolgy to signify their racial nationalism. His conciliatory words encapsulate what is wrong with the Right: they tend to endorse socially conservative issues and the expense of life-altering political policies. The social conservatism of the Right that Daniel is so enamored by is part of a larger net that includes racism (specifically anti-black), xenophobia (specifically against Muslims), and unilateral foreign policies. It is foolish in the least to think that solidarity with such groups is possible let alone desirable. But there is another issue.

He is unconcerned how this endorsement could harm the credibility of Islam and Muslims in the African-American community where Islam has had the greatest momentum but also conscientious people of all races who abhor the malicious nature of the Right. Haqiqatjou’s “Islam” would existentially clash with the native Islamic tradition that opposes oppression. He only reject what he sees as the race-activism of African-American Islam but hopeful of there being an ultra-rightwing counterpart that would shroud itself in white nationalism.

There is more to Haqiqatjou’s double standard on race vis-a-vis Islam. His pursuit of a white conservative American Muslim ideal is couched in the moral crusader language that originated in the Evangelical Protestant movement in the late-eighteenth century. In my article entitled ‘The Rise of the Akhi Right’ I detail the ‘traditional-values’ platform of Conservative politics in the U.S. It lays out how this pietistic view casts racial disparities as solely moral failures of the individual. There are practical consequences to this. If we absolutize the will of the individual then we are pitting the individual against the apparatuses of the state. This makes a mockery of personal agency for it exempts institutions, their functionaries, and policymakers of accountability and standards of justice while transferring the full weight of the conditions of social, political, and economic conditions of the country to the individual. Prioritizing issues that can be addressed at a personal or cultural level over and above issues that practically can only be addressed by the judicial and political system severely hamstring both the individual will and the possibilities within a culture to overcome its own pathologies. Homosexuality and transgenderism can be addressed by the individual or within the individual’s culture but the abuse of state power, corruption, corporate and government malfeasance need the heft of the formal and heavily funded agencies. Communitarian politics must have on their platform issues that affect whites and non-whites alike such as the prison/military-industrial complex, redlining, tax subsidies, police misconduct, DFCS, judicial and penal reform, and civil liberties.

Curiously, why does Daniel feel that white nationalists are acting in good faith here but opposes, say, critical race theory as part of a liberal-postmodern-Marxist threat to Muslim unity and epistemological purity? His charge that Critical Race Theory is “epistemologically un-Islamic” is because it was not developed by the Ulema, religious scholars is  spurious. How hypocritical for the proponents in the akhi-right to not be not epistemologically pure but they are founded on ideas that are not only alien but contradictory to Islam. These being: Protestant pietism, unrestrained capitalism, and correspondence theory of truth. Protestant pietism is a submovement within American religion that began with the Lutherans in Germany and spread to the U.S. where it took full expression during the Second Great Awakening. It emphasizes personal righteousness as independent of systemic and structural modules.

What makes pietists peculiar is that they believe that they must be active in politics to purge society of sin but they regulate “sin” to personal vices and indecency. Their idea of sin does not include victimizing the poor through policies that directly contribute to widening the wealth gap and raising the poverty line. They often attribute large numbers of impoverished to moral failing even while holding the contradictory stance that charity to the poor is virtuous. This is their link to capitalism and partisan politics. As Paul Kleppner stated “the more pietistic the group’s outlook the more intensely Republican its partisan affiliation.”[1] The problem with pietism which is then the problem with the akhi-right is that by redirecting formal politics to only address the individual’s inner struggle with sin we neglect the institutional practices that obstruct righteous living. The irony here is that this is precisely the “opiate of the masses” kind of religion that Marx spoke of and which Islam in its prophetic form does not qualify. Daniel is unable to see that the licentiousness on which he and others are myopically focused is constructed by White Western civilization, propagated in the world due to its status as a hegemon, and how the liberation theology of the Black Muslim Tradition has a longer history combating social ills while maintaining a critical disposition toward systemic and structural racism.

Positing black initiatives combating the existential threats of anti-black racism as un-Islamic by some mythical standard of religious purity is a pseudo-argument that itself reeks of racism. Upon further examination of Haqiqatjou’s hypocrisy we learn that he is totally comfortable with using secular-atheist critical theorists to challenge false universals like scientific objectivism which is the basis for many arguments against the existence of God. On his Muslim Skeptic website,  https://muslimskeptic.com/, Haqiqatjou recommends the following authors as a resource for critiquing modernism: Paul Feyerabend, Lorraine Dotson, and Ludwig Wittgenstein. Haqiqatjou writes about book The Structure of Scientific Revolutions by Thomas Kuhn which explains Feyerabend’s philosophy incommensurability: 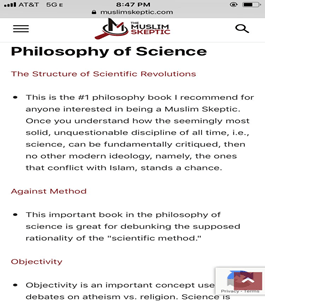 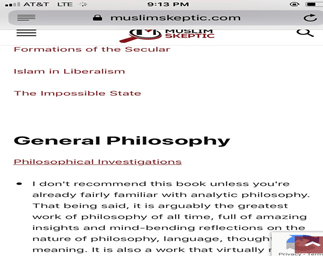 His endorsements of these authors and philosophers is that they are quintessentially secularist. Feyerabend rejects any religious or metaphysical category of the soul and proposes that we adopt a materialist perspective of the mind. He is considered a pioneer in anarchism. Wittgenstein and Datsan subscribed to the postmodern view that rejects an objective truth. In addition to their views they were homosexual and their homosexuality fit neatly within their post-religious ideation of truth and morality. And it is not just them but he recommends Stanley Cavell and William Craige Lane who is on record disparaging Islam and the Islamic concept of God as insufficiently compassionate.

What Haqiqatjou is saying is that it is ok to ignore so-called epistemological purity when it comes to fights that he deems worthy; if it can affect a certain outcome that he desires? Otherwise, why Feyerabend and not Marx? Why Wittgenstein and not Foucault? Why Datson and not Fanon? And why are any of the people on Haqiqatjou’s recommended reading list “Islamically ok” but not Derrick Bell and Critical Race Theory? The most egregious element about this double standard is that it downgrades the importance of justice and the fight for human rights of the Muslim community’s largest single demographic–African-Americans. Haqiqatjou feels that religious polemics are more valuable than black peoples’ lives and so anything that could be in service of proving racial discrimination and malice by state and corporate entities must be stringently evaluated and approved by a coterie of self-appointed gatekeepers while whatever helps him score points in debates with secularists and ex-Muslims sanctioned by “a means justify the ends” policy.

Haqiqatjou’s racial bias born out of a moral conservatism focused on sexual politics. An assocation fallacy is used to discredit critical race theory. The association fallacy is a common ploy they use to discredit the theory. Of course they can not explain how de jure racism was combated without referencing the methods used in Critical Race Theory nor can they prove that civil rights legislation eradicated de facto racism. Like Haqiqatjou they present Critical Race Theory as posing some vague threat to the iman of Muslims. This strawman critique has drawn them the most criticism. Anti-critical race theorist proponents in the Muslim community assert that Critical Race Theory is a Trojan horse for LGBT, Marxist, post-modern, and liberal agendas. Their reasoning is that since Critical Race Theory was created by Derrick Bell who was influenced by Critical Theory which was influenced by Marxism and postmodernism and that gays and lesbians have also used Critical Theory and Critical Race Theory then Critical Race Theory is Marxist, postmodern, and endorses LGBT activist and feminist. Association does not imply foundation. Two marginalized groups can use the same methods for combating marginalization while being politically at odds. Furthermore, these conservative Muslims seeking solidarity with the far-right would be engaging in a kind of apostasy since the conservative policies have shifted from issues of sexuality to issues of homeland security. Donald Trump did not run on a gay ban. He ran on a Muslim ban.

There is a consistent retort by these individuals that attacking or even acknowledging white supremacy makes one “leftist” or “liberal” and that combating white supremacy should not be a focus of Muslims. They think Critical Race Theory and all other critical analysis of racism harms Islam more than the policies of the American Right they endorse which criminalize Muslims and Islam. They ignore that white supremacy was the reason enslaved African Muslims could not transgenerationally transmit Islam. It’s the reason Omar Ibn Said was forced to identify as Christianity in his slave biography. It’s the reason Phylis Wheately originally a Fulani Muslim woman was forcibly converted to Christianity by white slave masters.  Despite white supremacy’s track record of actually disrupting the practice of Islam in this country first with slavery and today with anti-terrorism none of these far-right Muslims focus on white supremacy as an actual threat Muslims.

He has a masters in history at Kent State University with his thesis on The Cultural Jihad in the antelbellum South: How Muslim slaves preserved their religious/cultural identity during slavery. He is the Director of Research for Black Dawah Network.