The Black Dawah Network amplifies the voices of inner-city Black Muslims. Our mission is to “restore Islam’s reputation in Black America as a justice movement. This requires highlighting what Islam (Quran and ahadith) say about oppression.”  This includes bringing awareness about how institutional and structural racism operates. We should know how slavery damaged Black people socially, culturally, psychologically and economically. We should know how Black Codes, Racial Etiquette, Jim Crow, lynching, Red Lining, and more continue to keep Black people as a permanent underclass. Knowing that Allah’s divine words given to our holy Prophet Muhammad, peace and blessings be him, explicitly forbids racial oppression is necessary to properly articulate the Islamic ethos of justice.  Our mission also calls upon us to challenge the work of Muslim scholars that support white supremacy and/or obfuscate the very real oppression black people face.

In his podcast, Muslim and Being Black in America: Revisiting Zaycoona: From Hamza Yusuf to Abdullah bin Hamid Ali,  Bilal Abdullah is dismayed by the anti-black views expressed by Zaytuna College professor Abdullah Hamid Ali when it comes to wealth disparities,  ”We all know the history leading to some of this. But, much of what we witness can be attributed to irresponsible behavior and not taking advantage of education.”

Efforts to deny that racism both past and present plays the most significant factor on the Black-white wealth gap by Abdullah Ali, a professor at the first accredited Muslim college represents seriously obsufucates the oppression that Black people have faced and continue to face. Abdullah Ali’s decision to blame “irresponsible behavior” on the part of Blacks for the Black-White Wealth gap instead of white supremacy is racist. This article is an edited excerpt derived from Bilal Abdullah’s response to Abdulah bin Hamid Ali’s political commentary. 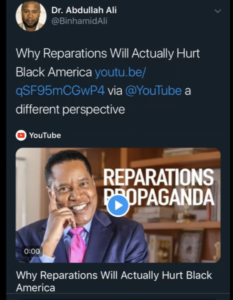 “What the heck is going on with Zaycoona College? Zaycoona Institute, Zaycoona plantation? That’s what I just called it!  We’re gonna call it that: the Zaycoona plantation. First, it was Hamza’s useless speaking about racism and police brutality, and giving the same talking points of white supremacy saying; it’s because of bad families, it’s because Blacks commit more crime, it’s not really racism, because whites get shot too. He never apologized for his comments, and never addressed the systemic white supremacy that has been going on since slavery, instead he had his Black friend Imam Zaid Shakir, come and quell the Negroes and assure us that his friend Hamza is not racist or have any white supremacist leanings.

Then don’t forget when Imam Zaid did that long post on Facebook having the audacity to use the ayats in the Qu’ran defending our mother Aisha’s (ra) chastity to stick up for that white supremacist Brett Kavanaugh.

What are the odds that you have Hamza saying these racist statements, a Black Muslim, Imam Zaid Shakir,  protecting him, and then another Black Muslim, Abdullah Hamid Ali, trying to make us believe that systemic white supremacy doesn’t exist anymore? All in the same clique, all in the same plantation, all at the same college.

Abdullah Hamid talks about racial disparities in wealth and the buttermilk samosas Imam tom babble just starts flowing from him. It makes me sick man, he starts off by saying, we all know the history leading to some of this. What do you mean some of this? This is the white supremacist talking for him, through him, to us.

What the hell do you mean some? We were brought to this country in chains before there was even an America, we built this country from nothing, all of the wealth that preceded from that was because of us, and we got none of it, what do you mean some? How dare you, and then, when we were quote and quote freed, that wealth was not shared with us after years of laws on the books to stop us from gaining actual wealth, you’re saying well, they took those laws off the books now so now it’s your fault you don’t have any money; bro, if I hold you back at the starting line, and I’m ahead of you by 400 plus years and, and I’m ahead of you by trillions, and trillions, and trillions, of dollars ahead of you, then I look back and say, okay, you’re free to go now, how all of a sudden it’s your fault why you’re still broke?

Meaning, you have no wealth to pass down to your generations, and while the other person who is way ahead of you has all their wealth locked into their family and lineage where you can get it, and let’s say you do gain some wealth, I still have all of these other family members who are starting from the same point I was starting from and I have to help them as well, so like dude, what are you talking about?

When it comes to Abdullah Hamid Ali denial that structural racism plays the most signicant role in the black-wealth gap,  remember the famous bars from Jay’z blueprint album “caught up in the hype ’Cause he a wear a kufi, it don’t mean that he bright ’Cause you don’t understand him, it don’t mean that he nice.”

The book  A Color of Law by Richard Rothstein breaksdown how wealth was purposely kept from the Black people of America by the government via housing in other ways, and how it still goes on till this day.  The effects can be seen all across America.  Ali confirms his views by posting a video of Coleman Hughes who was at the reparations hearing, telling the government that Black people don’t need reparations.   Ali even goes on to say, “I really like him.”

Abdullah Ali and others appear to wear two faces.  One that looks to be Islamic and the other that looks to support white supremacy.  My brother and others, you can not serve two masters. Abdullah, your works are obvious that you are against reparations in some way for Black Americans, but why? We are owed a tremendous debt.  Why is Black people getting reparations a problem? Is this what Zaycoona is promoting?  Zaycoona and other institutions like it pander to immigrant Muslims who come here with their anti-blackness, so this is the core base these institutions are trying to align with.  I’m questioning Zaycoona stance on reparations now too, I’m questioning Zaycoona stance on white supremacy.

Black Muslims must turn away from this Zaycoona plantation and its professors.  Black Muslims must continue to call them out whenever we see or hear about the incorrect and inappropriate things they are doing or saying, and call others to turn away from them, period; because we are now looking at you very suspicious and we don’t trust you.  You have shown that you side with white supremacy on many occasions and we’re not accepting that.

Now I’m gonna tell you what will happen next.  Taking this kind of stance is not without risk.  We will be called all kinds of names, we will be called bullies, reverse racists, colonizers of people thoughts, radical Black Muslims, and Black extremists, all because we don’t want to accept, and all because we stand against anti-black propaganda.  However, we must as Allah says, “stand for the truth, whether for or against ourselves and never fear the blame of the blamers.”