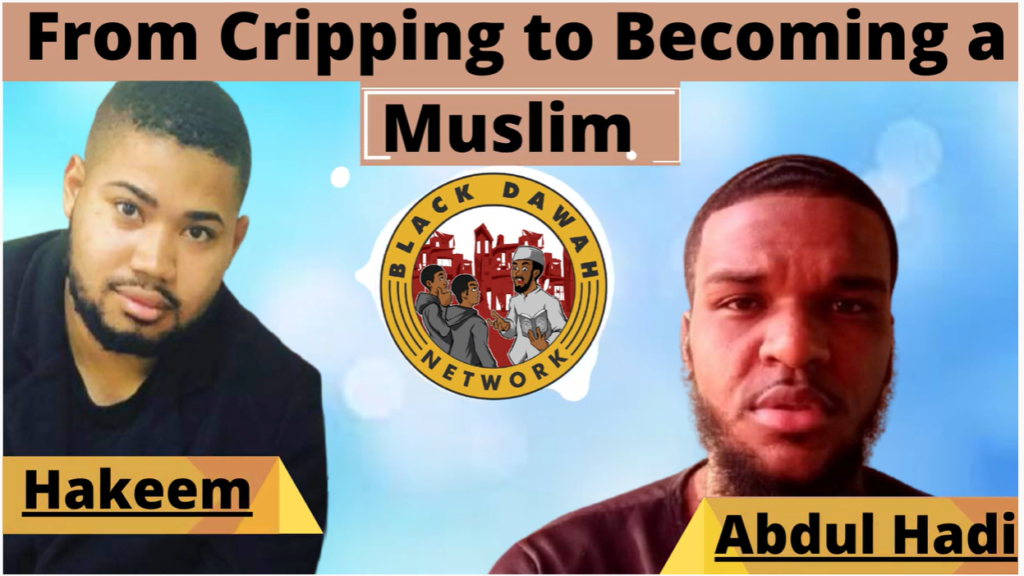 The Crips are a prominent African American gang founded by Stanley Tookie Williams in Los Angeles.  Though originating in Los Angeles, California the gang has since expanded into other cities including New York.  The Crips are known for their bitter and deadly war with the Bloods. Taking us on his journey to joining the Crips, brother Abdul Hadi stated he encountered numerous problems with the local bloods in the Bronx, New York.

Members of the bloods would terrorize the community. Prior to joining the Crips, he was often jumped by several members of the bloods. He states, “They were doing this not just to Crips but to neutral people, women, people who didn’t have anything to do with anything. I couldn’t fight against them by myself. It was a survival thing.  At the time, I looked at it as though I was doing something constructive by joining the Crips.”

Unfortunately, Abdul Hadi would find himself partaking in some of the same violent acts the bloods were known for. Discussing daily life as a member of the Crips, Abdul Hadi states:

You either selling drugs, you organize robberies, anything that generates money for the gang. Then it’s about controlling your territory. When the rival gang comes on your turf, you have to make an example of them. You have to display a lot of violence when you encounter the rival gang, especially on your home turf. You gotta protect your turf.

As a member of a gang, Abdul Hadi stated that he always thought he could go to prison but never thought it would be under the circumstances that it was.  Abdul Hadi learned that a high-profile member of the Crips had cooperated with the police in an investigation against another member of the gang. Abdul Hadi states “The Crips had a code and snitching is going against the code.”  The fellow Crip denied that he cooperated with the police and began showing up at Abdul Hadi’s house threatening his life for calling him a snitch. As a result, Abdul Hadi shot his fellow Crip.  Explaining this, Abdul Hadi “He ended up telling on me which made me believe that he did tell the first time.” Though the shooting was found to be justified self-defense, the court found that Abdul Hadi was not justified in possessing an illegal possession of a firearm.

In 2010, when Abdul Hadi was only 18 years old, he would be sent to Rikers Island for illegal possession of a firearm where he would undergo the process of transformation by embracing the religion of Islam. Abdul Hadi encountered a Muslim inmate who gave him literature to read about Islam and he would begin to attend Islamic religious services at Rikers Island where would eventually take his shahadah.

He selected the name ‘Abdul Hadi’ for himself stating that upon embracing Islam he realized throughout his life he was misguiding people to do wrong thing as part of a gang. Now as a Muslim he wanted to help guide those to do the right things. Abdul Hadi states he took seriously his time in prison to study Islam so that he could transform himself to become a better Muslim.

Upon becoming a Muslim, Abdul Hadi states “A lot of my bad habits and behaviors were replaced with Islam.” Embracing Islam meant ridding himself of several negative traits he developed in the hood:

In Islam, if someone says something disrespectful to you, you can’t just punch them in the face. It was hard for me to hold my composure. You can’t behave the same way. This is what gave Malcolm X great and gave him discipline. It was a deep transition, it was hard, I had to fight with myself.”

Abdul Hadi would put this Islamic principle into place upon being released from prison in 2017.  First, he wanted to change his environment. Instead of moving back to his old neighborhood, Abdul would stay in a homeless shelter for a year.   While at the homeless shelter, he lived in bad living conditions, where around people with bad personal hygiene but he endured it to avoid having to live in his old neighborhood. Abdul-Hadi states that housing agencies discriminated against him due to his record and he would be denied housing opportunities numerous times. While looking for a job, Abdul Hadi stated that everything would fine, employers would be enthusiastic about hiring him but once his background check came back, he would no longer hear from them.

One job that Abdul Hadi successfully obtained fired him upon checking his record despite his good work habits. Abdul Hadi states that the trials of living in a homeless shelter, being denied housing, and denied a job would make many succumb to criminality but he wanted to please his Kord, so he continued to exercise patience.  Eventually, with patience and putting in extra effort, Abdul Hadi would get a place of his own and find a steady job. Malcolm X would serve as an influence on Abdul Hadi on his journey to change. He states, “Malcolm X is the embodiment of someone who was in prison and came home and changed their life.”

Being Around the Righteous

Islam would also teach the importance upon being around righteous people in his process of transformation. In the early stages of being a Muslim in Riskers Island, Abdul Hadi states that he hung out with Muslim prisoners as well as peers of his who would still gang bang. One day, a peer of his who was still in a gang got into dispute with a Muslim brother. Though Abdul Hadi states he was not there for the entire dispute, the peer bragged to him about how he was gonna beat up the Muslim brother.

Abdul Hadi’s Wisdom on Sharing the Message of Islam

When asked how we as Muslims best give dawah to brothers in his old gang, the Crips as well as other brothers still involved in street life, Abdul Hadi declared “The best dawah we can give is through our actions. Aisha(Ra) when asked about the Prophet, pbuh, stated he was the Quran walking.” Abdul Hadi encouraged us that we have to make dua that Allah opens up the hearts of our brothers involved in gang life to the message of Islam.

Abdul Hadi acknowledged that “A lot of our people feel there is no forgiveness for them that they can’t change. They’ve been doing this wrong for so long. The hood won’t let them change.”   In order to challenge this thinking, Abdul-Hadi states “There’s a passage in the Quran, where Allah says ““O my Servants who have transgressed against their souls! Despair not of the Mercy of Allah: for Allah forgives all sins: for He is Oft-Forgiving, Most Merciful.”

Abdul Hadi encourages us to share stories about the companions of the Prophet Muhmmad, peace be upon him, and how they were engaging in some of the same behaviors but through Islam became the best of people. We can also share with our people the story about the hadith of the man who killed 99 people but sought Allah’s forgiveness, made an effort to obtain Allah’s forgiveness, and eventually Allah forgave them. We should also encourage our people not to delay their repentance.

Fighting For The Right Cause and being steadfast on the Deen

Black brothers who are involved in gang conflicts are soldiers but soldiers who are fighting the wrong battle. These young men are forced by the white supremacist power structure to live in crimogenic environments fostered by years of redlining and discriminatory policies.   While all of us have to choose who we want to be and what we want to do we have no choice in where we are born and the conditions that shape and mold us in our youth and this plays a big part in the options of who we can be and what we can do. The young black men who reflect on their wrong actions also reflect on how the socio-economic conditions that were in place generations before they were born were major contributors to their destructive lifestyle. The cycle of gang culture is sustained by poverty and a lack of viable options which were inherent in the legacies of housing discrimination going as far back as the late nineteenth-century.

When Africans were brought to America, they had the sole purpose of being uncompensated labor for the agricultural-capitalist system of colonial America and then the United States. When there was no longer a need for chattel slavery as the United States transitioned into a fully developed industrialized nation the economic utility of Atfrican Americans disappeared. Black people became obsolete. The question then became what they are to do with all of these black people whom they brought to this country and now were a permanent part of the United States. They were exploited by the military during America’s wars, but this was limited. Ultimately the objective was containment. Institutions in every sector of the country adopted an official and unofficial practice of racial discrimination. Conversion to Islam has empowered many young black men trapped in this system to counteract its debilitating impact.

Upon leaving the Crips, Abdul Hadi states he would have some peers still involved in gang life trying to imply he had become “soft” by leaving the Crips to become a Muslim. They would inquire “Oh you ain’t gang-banging no more.  Have you become soft?” Abdul Hadi remains that he is still a soldier but that “I fight for a different cause now.  And that’s the thing. A lot of us who were gangbanging solidified the deen in jail. A lot of us who were putting in work for gangs started putting in work, fi sabilillah, for the pleasure of Allah.”

Indeed, no one who is familiar with the legacy of the Muslims would come to the conclusion that Islam makes you soft. On the contrary this religion has consistently produced warrior since the time of the Prophet Muhammad (saws). From Umar ibn Khattab, Khalid ibn Walid, and Ali ibn Talib (may Allah be pleased with them all) to Malcolm X Islam has been the benchmark of courage. Fighting in the Holy Quran is mandated by Allah but only in the service of preserving the quality of humanity.

Indeed, the journey from gang life to the Ummah does not make one soft; it means working to stop empowering assistant states attorneys, judges, private prisons, the prison industrial complex, and all those who profit from black people being self-destructive. Many black men who come from environments like that of Abdul Hadi have the mindset that being tough means being stupid and wicked. Islam teaches us the opposite: that being tough is being wise and righteous. Today, more prisons are being built as mass incarceration rises. Black people are the fodder for this wicked system and our wickedness only serves its agenda. Intelligence is being able to recognize the forces that are against us and how the enemy uses us in our own destruction. Abdul Hadi has done just that and now he is helping others do the same.