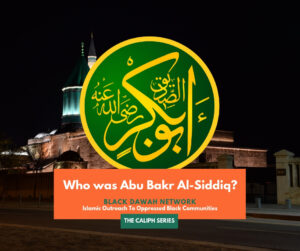 Abu-Bakr Al-Siddiq, was the first caliph or successor to the Prophet Muhammad, peace be upon him.

As a leader over the Muslim community, Abu-Bakr-Al-Siddiq showed us in words, actions, and deeds what true leadership looks like.  He showed us these characteristics as a caliph. The Black community can also produce leaders who have these characteristics, these same attributes, to help us achieve freedom, justice, and equality.

When Abu Bakr-Al-Siddiq, was first appointed Caliph of the Muslims he stated, “I have been given the authority over you and I am not the best of you. If I do well, help me and if I do wrong set me right. The weak amongst you shall be strong with me until I have secured his rights.”

The words of Abu Bakr display his immense humility. Though he had been granted much power, he did not see himself as superior to or better than the masses of the people whom he was ruling over. Abu Bakr wanted to be held accountable whereby people would help him to do right, and correct him if he did wrong.

In our era, white supremacy has created a system where few Black men see themselves as the head or leader of their family.  We have children here and there but rarely do we accept the leadership that is necessary to guide and direct our families. We are the first leader we need to be concerned with as the men in our households, the men in our family.   Real Black leadership starts at home. We must exemplify humility, a willingness to be corrected, and helped when going wrong. Even if the help comes from our women, children or other brothers. This may be hard but we have to build our families, by building our families we build our communities and by building our communities we build our nation.

Umar Ibn Khattib indicated that he often observed Caliph Abu Bakr walking in a direction opposite the way of his house. Curious, he followed Abu Bakr and saw him going into someone’s home. Later, Umar knocked on the door and a blind, frail, elderly woman opened the door. Umar asked the woman who she was. The woman replied she was poor and her husband died a while ago.  She had no one to look after her. Umar then asked about the man who often visited. The woman said she did not know who this man was but that he would come in the morning to sweep her floor, milk her cattle, and cook her food. Umar told the woman that the man doing these acts of kindness was none other than Abu-Bakr Al-Siddiq.